A cable whip is a certain type of cable adapter, consisting of a multi-pole connector, which transitions into several lines, each with a single connector. Mostly we offer these adapters in combination with our breakout boxes.

The feed of several participants is done via the connectors of the box and is led together to one connector (e.g. D-Sub), so that all signals are led via the cable whip to the corresponding end devices. This may be, for example, a measuring device.

Such an adapter can consist of 2-10 single cables, whereby the limitation mostly results from the diameter of the used cable type. 10 cables with a large diameter tend not to fit through the grommet of the D-Sub housing, so it would be advisable to use a thinner cable here.

The D-Sub connector is available as a standard version in DB9, DB15, DB25 and DB37. The cable length as well as the choice of connectors are entirely based on your application, so we can manufacture cable whips exactly to your requirements from as little as one piece.

If you use a PCB in conjunction with a coaxial cable, it should have a temperature-resistant dielectric. Usually we recommend cables with a FEP jacket such as RG316, RG178 or Multiflex 86.

Further suitable cables can be found under the following Link

With us you can have a cable whip from D-Sub to coaxial cable with a matching connector manufactured entirely according to your ideas already from one piece. You can find example pictures at the end of the page.

As a rule, the signal distribution at the D-Sub connector or at the D-Sub socket is realized via a suitable printed circuit board. This guarantees a constant quality and optimizes the distances of the connection to an optimum.

This connector type is available on request..

Prices plus value-added Tax, plus shipping 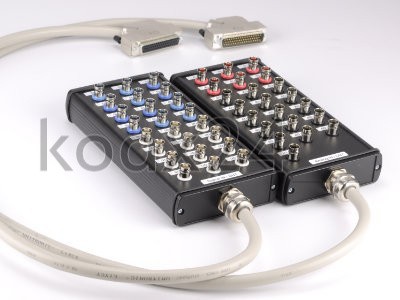 With us no wish remains open.
With our passive distributor box with BNC connector and D-Sub connector, all signals are output 1: 1 to the connector of the cable.
We deliver the junction box exactly according to your specifications for the pin assignment you require.